If you want to stand apart, profile your competition
How Much Should a Logo Design Cost?
Your Samwise Design Partner
Rising Stars 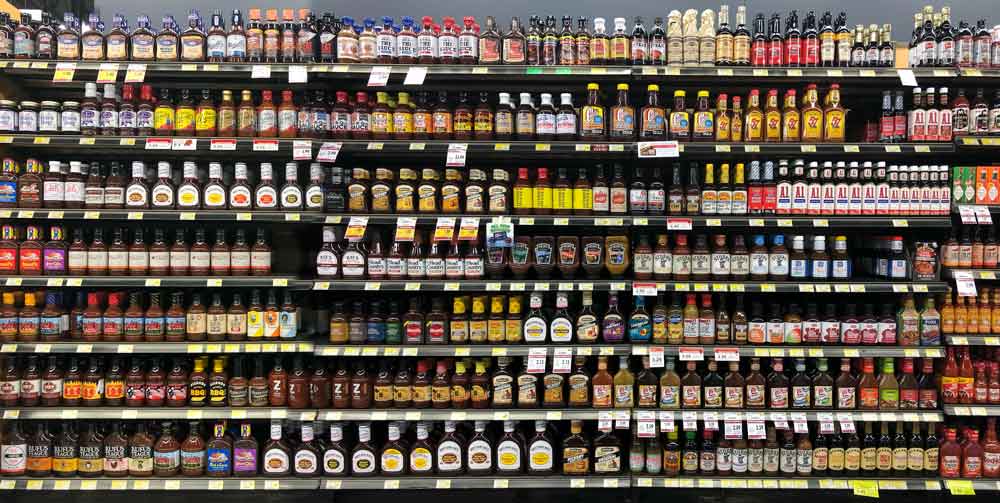 If you want to stand apart, profile your competition

It's not the first time I've stood in the middle of the aisle, staring with a glazed expression, at the mammoth, ten-foot-wide, seven-shelf-high wall of sauce.

In Kansas, we seem to worship barbecue. Most supermarkets in the Kansas City area have half an aisle built as a shrine to the sauce gods. Here's why I find this retail spectacle fascinating enough to stop and study.

The bottles all look the same!

Sure, there are five or six ways to spell barbecue. And, some labels will portray a pig holding a fork in its "hand", while others will show the more realistic swine in profile with the butcher's cut lines. But these shades of dark brown all start to look alike.

As I continued shopping at the supermarket, I wondered how any sauce bottle could possibly stand out. Barbecue sauce is a saturated category.

I also realized it's really no different than many other categories. Businesses in general, like bottles of barbecue sauce, lined up on a shelf, wondering if they have what it takes to get noticed and put in the cart.

You may be reading this and thinking about how difficult it has been for your business brand to stand out from the competition. It's a difficult task that requires a lot of experience to do well.

As Ries states in his book, The 22 Immutable Laws of Branding; "Successful branding programs are based on the concept of singularity. The objective is to create in the mind of the prospect the perception that there is no other product on the market quite like your product."

I hope to go into this in future articles. However, I want to share a fun little exercise you can do yourself right now.

Position mapping is an exercise that requires only a pen and paper. It's a way to profile the attributes that identify your competitors, which in turn can reveal positions that are not yet occupied or owned. This is where your brand has the opportunity to stand out.

Here's how it works.

First, write down a list of attributes that define your competition. These could be brand qualities like:

Next, pair each of the attributes on your list with its opposite. For example:

Finally, draw a quadrant map and place your word pairs on opposite sides of the two axes. Begin plotting where you think your competitors land. This exercise is so simple, yet the variations are almost limitless.
‍

Once you've plotted out your competition, you'll notice that one quadrant looks a little emptier than the other three. This is the position that's not yet been claimed. This is a potential empty shelf for you to set up your bottles of sauce.

By profiling your competition, you can now think about how you can stand apart.

Try it out. Make a list of your competitors, followed by a list of the qualities each claims for itself. Once you feel you have a good list, write down the antonym for each property listed. Now create a map. You'll see how this can make the perceptions swirling around in your head more tangible.

I hope you find this helpful. Shoot me a message and let me know if you tried it out and what you discovered. I'd love to see what you came up with.

One more thing. I'd like to raise a disclaimer. Just because there's a position that's not taken by anybody else doesn't mean that it's the right position for you. Even if this is obvious to you already, I feel it should be said. As I mentioned earlier, differentiation is a problem that requires a strategic solution for the brand. It takes a lot of experience to do it well. There can be a really good reason why a quadrant is empty. So don't rush to claim it without research. But hopefully, by creating your own positioning maps, you start to become more aware of the ways to stand out that may not have been obvious before.

Want to deliver better quality designs to your customers?

Send me a short message describing what you need help with and together we can discuss if Prest is the right fit.

Thank you! Your submission has been received!
Oops! Something went wrong while submitting the form.